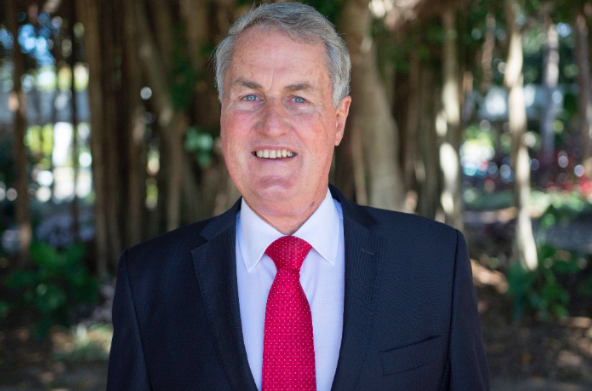 After a successful term as alderman of Mackay City Council in the 1980s and overseeing the amalgamation of the city and shire councils, Mayor of Mackay Regional Council Cr Greg Williamson left to pursue a career in corporate business. This time serving on boards provided a wealth of skills and experience that Cr Williamson was able to use for the benefit of Mackay since returning to council in 2016.

Tell us about yourself. Why did you decide to join council and become Mayor?

I was elected to council in 1988 as an alderman on the original Mackay City Council. I put my hand up for mayor in 1991 on the platform of amalgamating the city and shire and I got the job.

The shire didn’t want to be amalgamated and we did, so we won that with the state as the adjudicators. What happened next happened with a lot of amalgamations with cities and shires up and down the Queensland coast, in that we won the battle but lost the war. There were twice as many people in the surrounding shires as there were in my city in those days, so at the amalgamated election the Shire Chairman got the Mayor’s position.

I then went off and did 21 years in business.

What make you decide to come back after all those years?

I’ve had some very senior roles throughout Queensland. We’ve always lived in Mackay but I’ve spent about 10 or 12 of the last 20 years working out of Brisbane and commuting backwards and forwards from Mackay.

I’m at a stage in my life now where I thought, as a fifth generation resident of this region, and if I can contribute, well now’s the time to have a go. There’s no use in thinking towards the end of your life I wish I had done that, so I took the advice of several people and put my hand up then got the job.

Do you think those years in business made a difference and helped when you returned to council in that you had more experience to draw from?

Absolutely – the council is a very big business now. The council that I was mayor of before, was quite a small outfit compared to what we are today, with 1,100 staff and 7 and a half thousand square kilometres of footprint and a budget of over $300 million. Mackay Regional Council (MRC) is a fairly large outfit and I think my experience in business and in working for and on boards has given me a good grounding for this job.

Local government is quite demanding and unless an elected member has had some experience at board level of large companies, it can be quite daunting.

How would you describe your vision for Mackay?

This is an area of Queensland that I love for very obvious reasons in that it is my home, but when you look at Mackay, Issacs, Whitsundays, it is an area that really produces for the Queensland economy and for the national economy. My vision is to increase the liveability of this area so that we can grow but not at the uncontrolled growth we had during the last resources boom.

At a hundred and twenty odd thousand people, there’s room for us to grow, but that growth has to be with people who want to live here, who want to grow industries, want to be part of the existing industry structure that we’ve got.

We are still underpinned by the resource sector and we’re proud of that, but we’re also got tourism, beef cattle, a large agricultural industry and the new biofutures area that we want to play in as well. It’s about building a whole community that has a number of strings to the economic bow in terms of how you can make money here and not just a singular reliance on one sector.

I think our community holds dear its love of the outdoors, we are a huge sporting town, so access to facilities for both children’s and adult’s sport is important. We hold dear our access to the water. Mackay has the largest percentage of boat ownership in regional Queensland.

Our community is high in volunteerism, it is friendly and, we offer a lifestyle that most of our people would not want to give up. We have all the facilities you would find in any other major centre but our lifestyle is based around great weather, 31 beaches, close to the water and a valley, which is predominantly green because we grow a third of Australia’s sugar cane.

What are the main challenges facing your city?

Most of the seats in the Queensland parliament are located in the south-eastern corner of our state. The Queensland government get about $3.8 billion dollars a year from mining royalties and that pays for nurses, policemen, firemen, paramedics and teachers. $2.2 billion dollars of that comes from the ports in the Mackay region. And do you think we get our fair share of that spend? No, we don’t and that’s the crux of the challenge for us in regional Australia and regional Queensland.

When you look at the Mackay, Issacs, Whitsunday area, our Gross Regional Product per head is about $82,000 – $83,000 per head for the 180,000 people who live here.  Compare that to the national average, you can see that this is an area that punches way above its weight in terms of its delivery to the national economy. Our greatest challenge is to get the public expenditure to deliver the infrastructure that allows us to grow and industry sectors to grow.

What are the main opportunities for Mackay? Any interesting projects in the pipeline?

We have just had declared a Priority Development Area to capitalise on our waterfront and the only blue water river in Queensland.

We’re building a new urban environment and innovation hub. We actively trying to target the future in terms of biopharmaceuticals and bioenergy and the new generation of jobs that don’t need to be done in a capital city. As long as we can provide fast internet services, people can work from anywhere in the next generation of jobs that are centred around sustainable futures, centred around biofutures and megatronics.

We are a large agricultural area in our Mackay, Issacs, Whitsunday area and the value of the agricultural industry is over a billion dollars a year. In that industry alone, there is a whole future to be carved out for artificial intelligence and machine learning. Those are the sorts of areas that our young people are keen to get involved in. They can still be on the land, but can be involved in developing machines that will learn how to get the best out of the land.

You can see that AI is the way of the future, as is remote work.

Absolutely. We’re trying to encourage thought leadership that can get around some of the legacy issues of “that’s the way it has always been done” in the beef and sugar industries for example.

The beef cattle industry is worth well over $400 million a year to us. Now can you imagine what would happen in terms of the supply of beef out our region to the emerging markets in south east Asia and China and India if we developed synthetic beef? That’s about growing beef from animal cultures and exporting that in addition to exporting the beef from slaughtered animals.

There are a lot of legacy issues to get over in doing that, but the regions that get on that boat and start to supply synthetic beef to south-east Asia will do well.

Why did you choose to join Regional Capitals Australia?

Regional Australia is where the growth needs to happen. There are politicians calling for Australia to stop growing in terms of population based on the totally myopic view of overcrowded major capital cities. Regional Australia has the capacity to grow, we have the room to grow and the industries that can afford growth, we just need infrastructure spend.

I get really upset by listening to politicians who come from the large urban areas of Australia saying we don’t need more growth – what absolute rubbish! We might not need more growth in Sydney because it is overcrowded and there’s traffic chaos, but let’s go to regional Australia, let’s give a reason to get out of the capital cities and promote growth in regional Australia. But you can only do that with infrastructure. I see Regional Capitals Australia as being a voice for us all.