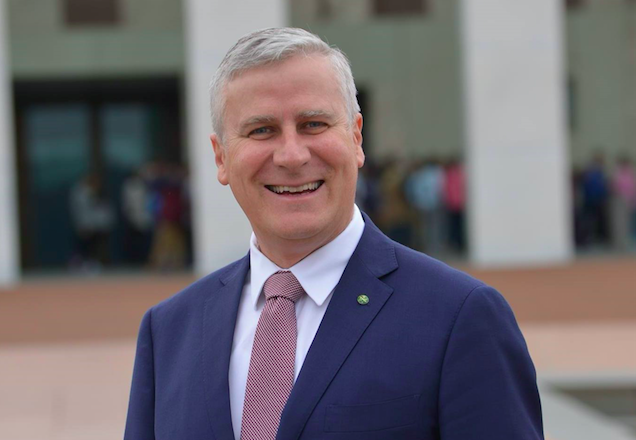 With a federal election approaching, Regional Capitals Australia will be sitting down with relevant Ministers and Shadow Ministers to get their views on all things regions and regional capitals.

Our first interview for the year is with the hon Michael McCormack, Deputy Prime Minister of Australia, Leader of The Nationals and Minister for Infrastructure and Transport and Member for Riverina, which includes the regional capital city of Wagga Wagga.

A journalist by trade and the son of a Riverina dryland farmer, McCormack rose from the backbench to his new portfolio and leader of the Nationals after just seven years in parliament.  In his new role he has embraced the term ‘regional capitals’, using it to refer to our member cities in almost all speeches and public statements when discussing regional cities.

His maiden speech as Deputy Prime Minister could read as a statement of intent, in light of now live government programs, many announced in the May budget – his first as Deputy Prime Minister.  The availability of regionally based health and education services, the role immigration has played in building regional economies and ongoing support for farmers were all highlighted as priorities by McCormack in 2010.

There has also been a shift in priorities, the most notable being the National Broadband Network (NBN) which McCormack did not put much value into upon entering Parliament.

Stating in the same maiden speech that the NBN was something where he “encountered very few people who rated national broadband as something they could not live without”.  The Government’s creation of a regional communication portfolio now a strong recognition that regions must absolutely be connected to an increasing online world – just as much, or perhaps more as those living in big metropolitan cities.

What does it mean to you to be the leader of The Nationals?

I’m deeply honoured and humbled to be the 14th leader of The Nationals and a proud member of this passionate and dedicated team.

It’s a tremendous responsibility and one which I do not take on lightly. Our previous leaders—Barnaby Joyce, Warren Truss, Mark Vaile, John Anderson, Tim Fischer, right back to good old William McWilliams, like me a former newspaper editor – brought their own style to the role.

Each of them are different, but each were leaders who stood up not only for the rights of rural, regional, and coastal areas, but also for our nation.

Each of them helped carve our country into what it is today and set the standard in delivering for regional Australia.

And it’s that foundation on which each of us in The Nationals want to build.

What are the top three things (priorities) that you would like to achieve in this role?

Ever since entering Parliament, I have focused on regional health and education, as well as ensuring those who want to invest in and grow their farms and small businesses in the regions have the support they need.

As a Government we are delivering in these areas, particularly through the recent Budget.

Our investment in the Murray Darling Medical Schools Network – with regional campuses including my hometown of Wagga Wagga – will help deliver end-to-end training for doctors in the regions and deliver on something The Nationals and I have advocated for over many years.

Likewise, the fairer deal for country students accessing Independent Youth Allowance, announced in this Budget, will enable more rural and regional students to study at university and bring the many skills of a tertiary education back to their community in the future. This is also something we have worked on over many years.

And our small business tax cuts – delivered whilst I was Australia’s Small Business Minister – will help the many small, family and farming businesses in rural and regional Australia invest in themselves, grow and hire more locals.

There is also much more on our agenda – especially through the record $75 billion infrastructure package and many dedicated funds for infrastructure investment in rural and regional Australia, which are a key priority for the Government too.

Our record $75 billion infrastructure package is about connecting country communities, increasing productivity and ensuring Australians can get home sooner and safer.

We understand while congestion is a challenge in our major cities, we must invest in critical infrastructure in rural and regional Australia to help further boost productivity, connect farmers to markets around the world and create more local jobs.

Through the landmark Melbourne to Brisbane Inland Rail project we are building a corridor of commerce which will help farmers, small business people and locals get product to port more efficiently, and investment will flow into communities along with it.

The recently-announced $3.5 billion Roads of Strategic Importance (ROSI) package, targeted at critical freight routes, secondary roads and byways, will help those businesses which are taking advantage of our several new trade agreements by upgrading the critical roads which help get it there.

The Budget also included several large investments in roads such as the Bruce Highway near Gympie, the Coffs Harbour Bypass along the Pacific Highway, the Princes Highway in Gippsland and many others to help ease congestion and help people get home sooner and safer.

We have also boosted the Black Spots and Roads to Recovery programmes in the recent Budget – which includes substantial funding for every State and Territory – and will upgrade many local roads in rural and regional Australia, helping us work towards lowering the road-toll and building the safer roads we all deserve.

Do you think regional cities have different challenges and opportunities than rural towns and remote areas?

As Leader of The Nationals I know no two communities are the same and nor are the challenges and opportunities they have into the future.

That’s why the infrastructure investment through programmes such as Roads to Recovery and the Stronger Communities Programme allows locals to determine how to invest their allocation, because we appreciate the importance of local knowledge.

I am passionate about continuing to talk up the opportunities of rural, regional and remote communities around the country – no matter where they are – and we obviously need the understanding and passion of local people as well to make that a success.

Should separate policies be put in place to allow regional cities to grow?

No matter where you live I believe you should have the opportunity to pursue your passions. By backing the know-how and passion of local communities, we can partner with them and help rural and regional communities – such as our regional cities – grow.

You should not be held back by means of your postcode – whether you’re a business, student, individual – whatever. And you don’t have to be with technology, especially the mobile phone towers being built around rural and regional Australia thanks to our funding.

Each community has a passionate local MP, local Council and local leaders – as well as the many people who are running businesses, sporting and volunteer organisations – which I know are a source of great optimism and practical advice about their community.

Tell us what you love most about Wagga Wagga.

Wagga Wagga is a fantastic regional capital and a place I am proud to call home.

Like so many communities around the country, it is big enough to find a good cup of coffee yet small enough to care.

In Wagga Wagga, you’re 10 minutes from anywhere in town, which is so important when it comes to getting to and from work and drop the kids off to school, or whatever you might be doing.

Wagga Wagga has a vibrant local sporting and volunteer culture, it is supportive of local farming and small businesses, as well as being home to a world-leading University in Charles Sturt University and with all three arms of the Australian Defence Force, it is critical to the training and skilling of the men and women of the ADF.

It is a community which makes me passionate about our decentralisation agenda.

By moving some of the agencies or indeed some of the individual public servants to regional areas, we are helping to ease the congestion in large capital cities, boosting regional capitals and the towns and country areas around them, such as the jobs at AgriFutures in Wagga Wagga, and this has got to be a good thing.